You know you have been in the house too long when you’ve driven the dog to a breakdown and you find yourself walking through the house chanting to yourself “who you gonna call, Ghostbusters!”  I’m not exactly sure what has occurred over these last two weeks, although I believe it began when I had to kill a bug she was tracking through the air in the house (I may have made quite a racket smashing a magazine against the blinds making sure I got it), but something has Harper constantly looking toward the ceiling or sky for bugs or ghosts.

Now, I have gotten a little carried away with looking at the clouds while we’re outside and maybe Harper has seen a ghost or two up there, but we are in the midst of full blown puppy panic attacks and I haven’t quite found the cure.

I’ve managed to watch several movies ( Hope Gap, Ordinary Love, Edie, Hangman, The Trip, 3 Days To Kill, A Walk In The Woods...) and read several great books while I spend the evenings holding her so she doesn’t shake.  For some reason she is fine all day, but there must be a ghost that is appearing and joining us for happy hour.  I did not know it would take panic attacks to finally have a lap dog and I might have changed my opinion about having a lap dog now that she prefers to sleep on my arm and it’s not easy to turn the pages in my books and reach for the wine (one of us needs to relax during these attacks).  I thought I would try to distract her with the flowers and blue skies outdoors after a few days of rain and, of course, the flowers were surrounded by bees, but thankfully we escaped before she noticed that little bee in the bottom of the shot (Harper wants you to know she heard and saw the bee and what was I thinking).

now she believes, even though I completely disagree, that out of respect to the chipmunks she really should take care of her business on the driveway (the turkeys set a bad example all winter).

At this point, all I know is that if E.T. is living in our attic she’s going to have to adjust, because he’s a favorite and he’s staying, but if I walk into the living room and she’s sitting in front of the television like in Poltergeist, we’re packing our bags and leaving before the flowers disappear from the trees. 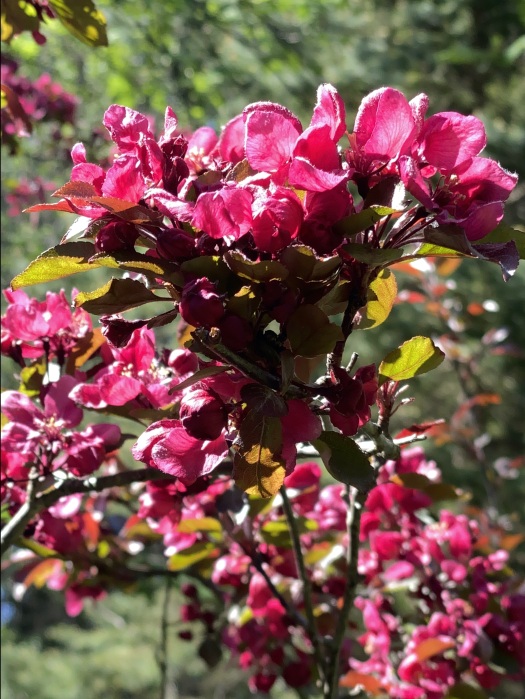 Things have slightly improved the last two nights, but I’m keeping a suitcase packed, because I’m almost ready to believe Harper and if I see a ghost we’re outta here!  I tried to talk Harper into the south coast of England after watching Hope Gap or the Scottish village of Lochinver after watching Edie, but Harper has voted for grandma’s house where there is always blue skies and no bugs and she is always spoiled, relaxed and happy.

17 replies to The Week In Seven Photos